Tuomas Linna, Birds (2020–22)
Composition
14 min 8 sec
First performance on September 26, 2022
at Kiel Opera House in Kiel, Germany
by Double Basist Heiko Machmannn
After my child was born, we did long walks. They often ended on park benches looking onto power lines. When I looked at the power lines from a certain angle, they formed the staffs of sheets of music and the birds sitting on them became notes. Tunes started playing in my mind!
I started composing a lullaby for my child in the footsteps of Fluxus artist Benjamin Patterson: he observed ants when composing, I photographed birds.

Tuomas Linna became a dad on a day in April during the strange spring of 2020. By coincidence, I became mom for the third time on the exact same day. The birth of a new life is a life changing experience and the birth of a new life under the given circumstances even more so. As the daily news reports on the worsening situation kept on coming, one’s fundamental certainties of the world order were challenged. And yet, in spite of this situation, the golden triangle of nursing: diaper, sleep, feed, remained the same. The life with a newborn is made of repetition. Somewhere amidst these repetitive acts Linna came up with and realized his idea for the artwork Birds.
To put his baby to sleep Linna tells that he started taking walks, sometimes multiple times per day. The walks often ended on a bench underneath a power line, which from a certain perspective resembled a stave, and the little birds sitting on the cables looked like notes. Linna was struck by the birds’ freedom. Their liberty seemed unobtainable as the restrictions in place prevented him from, for example, travelling abroad to visit his baby’s grandparents. Stuck on the bench, Linna recalled the Fluxus artist Benjamin Patterson and his method of utilizing coincidence when composing his groundbreaking piece Ants (1960–62).
In Ants Patterson worked on a new approach to chance-based music. He photographed the routes of his titular specimen and transcribed the ants’ positions in the photographs as notes on musical staves.[1] Inspired by this, Linna began photographing the birds on the power line in accordance with the amount of time it took him to put his baby to sleep on that day. According to a carefully contrived method he then converted the placements of the birds in the thousands of photographs into notes and further into a composition. This lullaby, Birds, will reach its final format anew each time it is performed by a musician, first of whom is contrabassist Heiko Maschmann.
The working method of both Patterson and Linna follows the principles of utter Fluxus in the sense of mixing different medias in open-minded and unconventional ways. This intermediality is central to art defined as Fluxus; the Fluxus artists are often interested in observing what happens when different medias encounter each other, and chance and accident play a big part in their work. Moreover, it is interesting to approach the working method by understanding it as a kind of transformation, within which a visual image is converted into sound. What happens in this process? How does the transformation and the use of another sense alter the experience? Can you hear an image or visualize a composition?

The birds in Linna’s work seem to produce fortuitous music into this haphazard, chaotic world, where one’s control over things extends only so far. For Fluxus artists this attitude offered a way to broaden the perception of art. Given the specific context of Linna’s work, one cannot help considering it also from the perspective of the topical circumstances and their impact. The number of possible chains of events at any given moment is countless and the predictability of the end result often close to minimal. Nevertheless, or perhaps precisely because of these interrelated and messy nets of events, some incidents occur while others don’t. A bird sits on the power cable before flying off, a baby is born on a given day and an alteration in the spike protein of a virus takes place. Perhaps Linna’s work offers a way to decipher and make sense of this complexity. At the very least, this insightful focusing on the fleeting everyday details provides comfort and meaning among all the uncertainties.
Milja Liimatainen
Curator, Art historian
[1] Walls, Seth Colter 2016. Benjamin Patterson: The Fluxus artist who composed with ants. (Accessed: 5.8.2022) 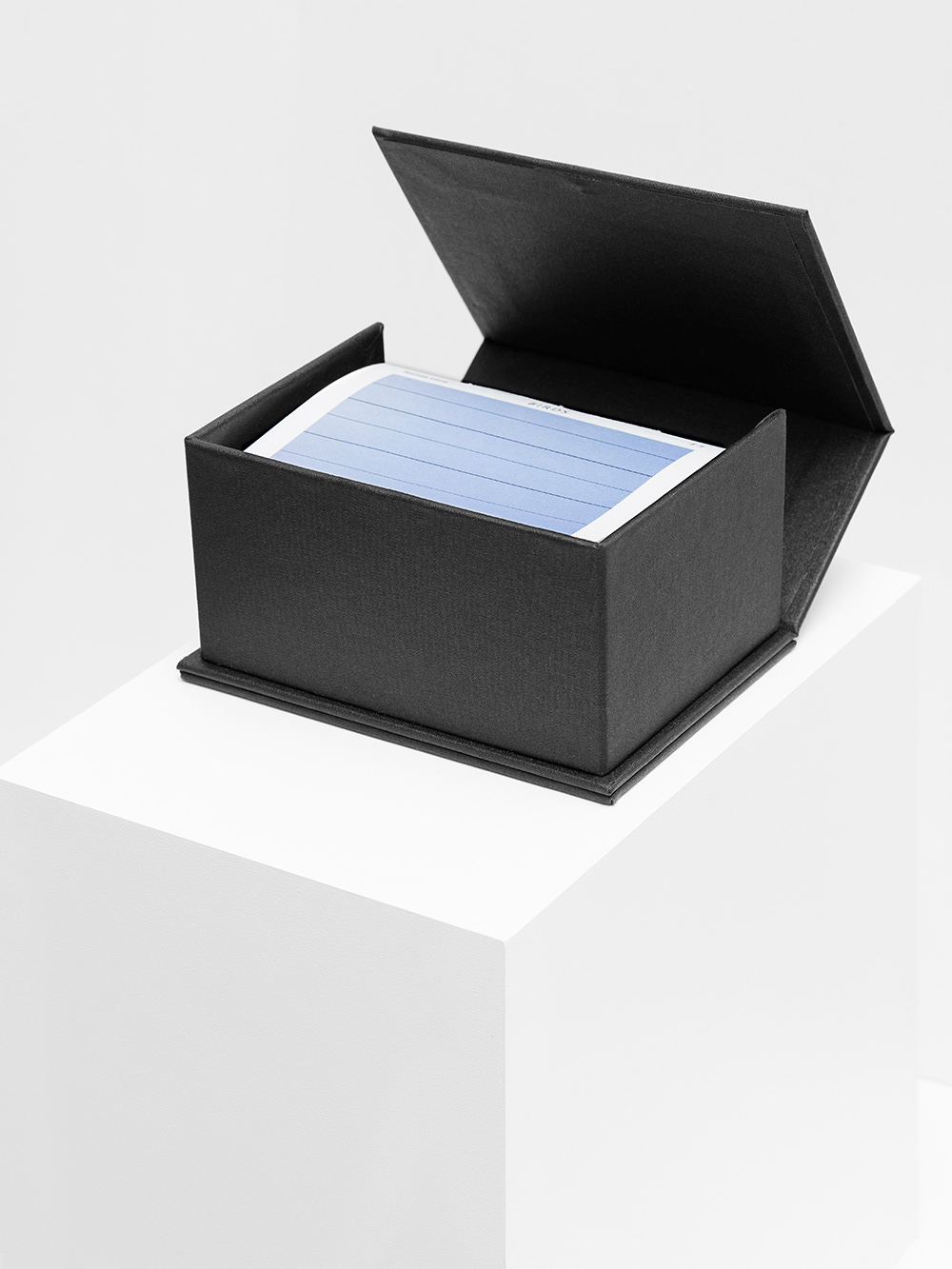 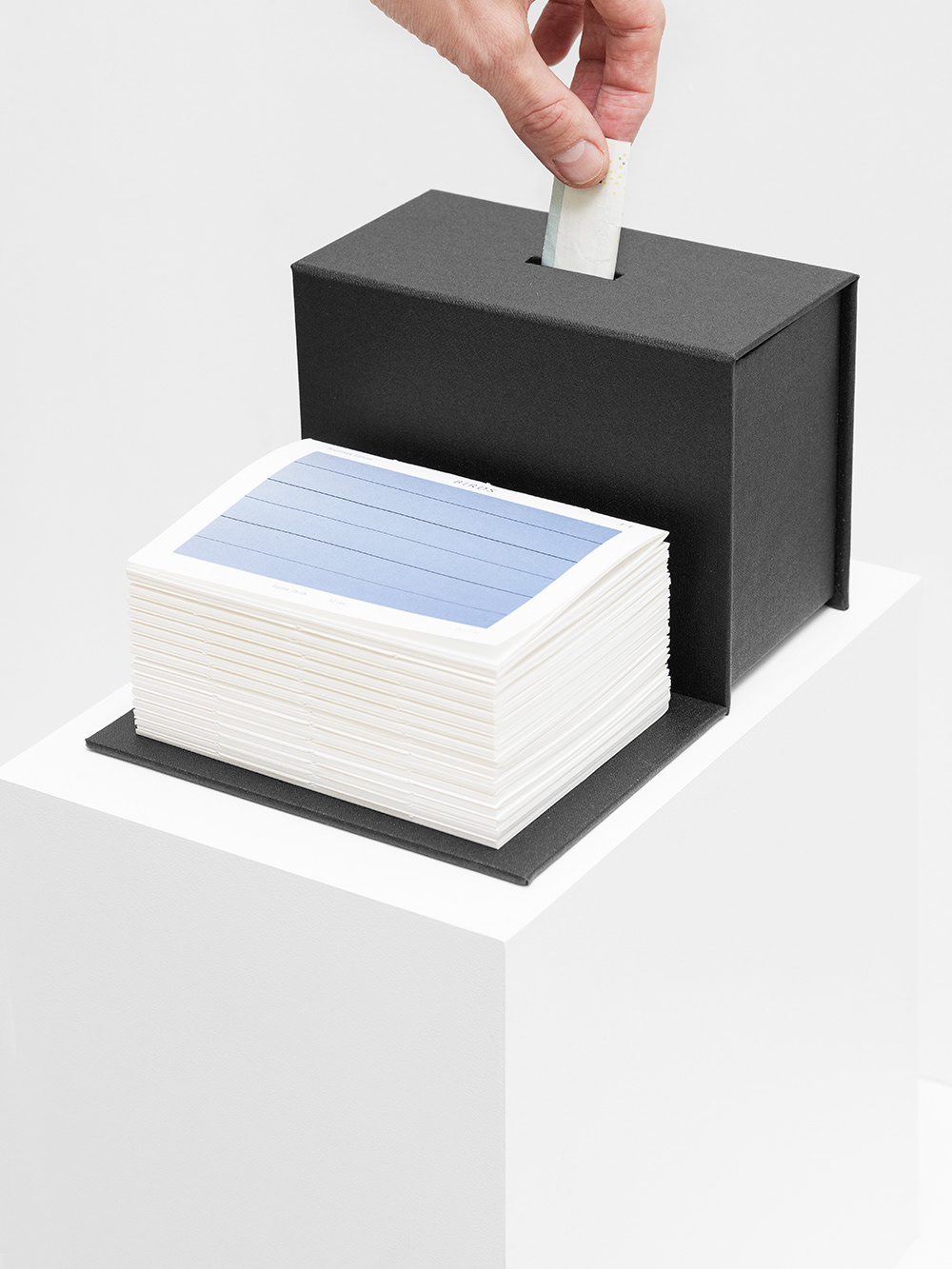 Transport / cash box
135 x 180 x 90 mm
Edition of 1
Doppel F, von Fluxus bis Finnland
26.9.2022, Kiel Opera House
With this concert, Klangrauschen would like to commemorate 60 years of the Festival of Newest Music in Wiesbaden and at the same time draw a link to the current focus of the Philharmonic concerts with works from Finland.
In September 1962, the Newest Music Festival took place in Wiesbaden, which has come to represent the big bang of the Fluxus art movement. Ever since the ideas of the Fluxus artists have strongly influenced contemporary art and music all over the world. Numerous works are somewhere between performance art and classical music. Heiko Maschmann will perform works by Fluxus co-founder Benjamin Patterson (Variations for Double Bass) and by living Finnish composers Aulis Sallinen, Tomi Räisänen and Tuomas Linna.
Linna's Birds is based on a concept borrowing heavily from Patterson's Fluxus-piece Ants. The latter will also be played as a reference in the concert.
The works Crossings by Tomi Räisänen and Birds by Tuomas Linna were composed for Heiko Maschmann and will premiere that evening.
Contributors :
Heiko Maschmann, double bass (member of Ensemble Klangrauschen)
Tomi Räisänen, electronics
Johannes Maschmann, audio and video technology
/
Birds is supported by City of Espoo, Arts Promotion Centre Finland and People's Cultural Foundation
↑